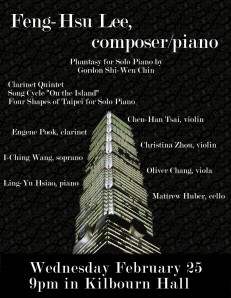 Quintet for clarinet and string quartet is inspired by three Japanese poems, the haikus of Matsuo Basho (1644-1694).  Two of the three poems are from Basho’s The Narrow Road to Oku.  Every poem represents the main idea of a respective movement.  Nevertheless, there is no general title for the whole piece, because I would like my audience to be touched by the purity of the music, without restricting their emotional response.  Therefore, my stance as a composer here is to represent the poems while integrating my own interpretation of the poems into the music.

The three haikus of Matsuo Basho I chose for this piece are as follows,

I.
Sick on a journey,
my dreams wander
the withered fields.

In this piece, the clarinet in the three movements plays the role of a sick traveller, a weeping bird and a brave warrior in the three poems.  My interpretation of the three poems is related to an incident occurring to my family last summer.  When I returned toTaiwanfor the summer break last year, my first one after studying in the United States, I thought I would have a wonderful time meeting my family and friends, to my great consternation, my father suddenly fell seriously ill.  He was diagnosed as having a lung cancer, and until this moment, he is still undergoing his chemotherapeutic treatment.  When first learning this bad news, my mother, my younger sister and I could not believe that a person who never smoked and drank alcohols, like my father, could have had a lung cancer.  As the bird weeping for a passing spring in the second poem, I just could not stop my tears from blurring my eyes, and my father, like the sick traveler, struggled against the unfair trial of destiny and he needed to fight for his life like the brave warrior.  However, he is highly aware that there are too many things and people he wants to cherish and hang on for, and therefore, he simply cannot drop out of his life journey easily.  Meanwhile, I also find how much I have loved my father, just in the same, profound way he has always loved me.

This piece is for my Master of Music degree thesis at Eastman School of Music, and this is a piece I would like to dedicate to my dearest father.  Without his wholehearted support and understanding, my dream of studying here would not have come true.  My father also has done his best to remain positive about life even if he has undergone several painful treatments.  Through him, I also learn that I can be brave and positive even if life is often unpredictable.

This is the world premiere recording.